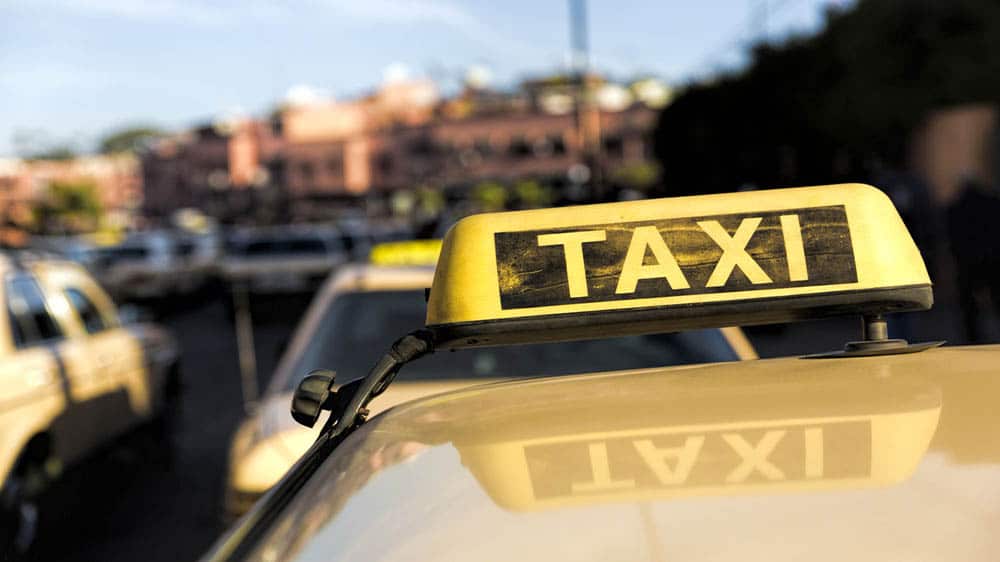 To move in Marrakech there is different ways to visit the city: by car, on foot, bike or scooter.
the bus network ALSA (urban and electrical) of the city is well developed and not expensive (4 dirhams the way). Taxis are also very effective, and the fare is very accessible, around 20 dirhams depending on the length of the trip and the increase which takes place at night for trips in the city center. The minimum fare is fixed to 7 dirhams. Green taxis can also book in advance subject to availability of taxis in the geographical area to the 0524409494,specify the desired path.

Arrival at Marrakech-Menara airport is 3 km away from the city, two choices available to you to reach the Center: the shuttles of the urban network of ALSA, the bus n ° 19 run between 6: 00 and 9:30 pm for a fee of 30 dirhams (passing every 20 minutes about). You can also borrow the taxis, which are present at the airport day and night. Their rates are regulated and are displayed on a sticker. It will cost 70 dirhams in day and 100 dirhams the night in the airport and the city center direction. In the opposite direction, prices are more negotiable.

Renting a car is more recommended if you stay in the Palm Grove or if you plan a few trips outside Marrakech.

Car rental agencies are many. Beside the international brands like Hertz, Sixt, opinion or Europcar, local agencies also offer this service. 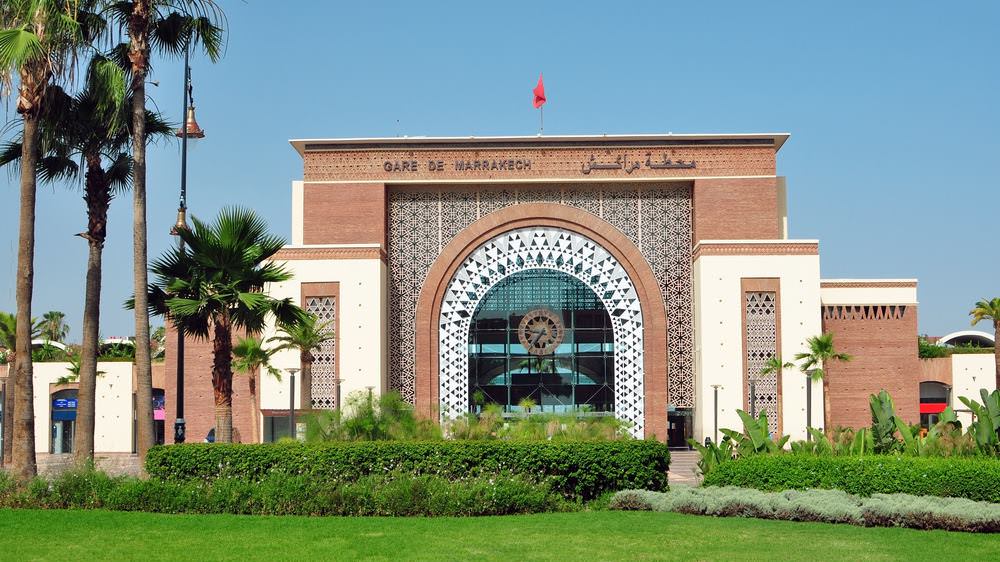 The carriage in Marrakech is unavoidable; it is very nice to take advantage of this means of transport during your stay in the red city.
They are everywhere where sometimes you berth during your walks. A carriage has 4 or 5 places. According to the circuit, please take the time to negotiate the fare before your ride with the driver. 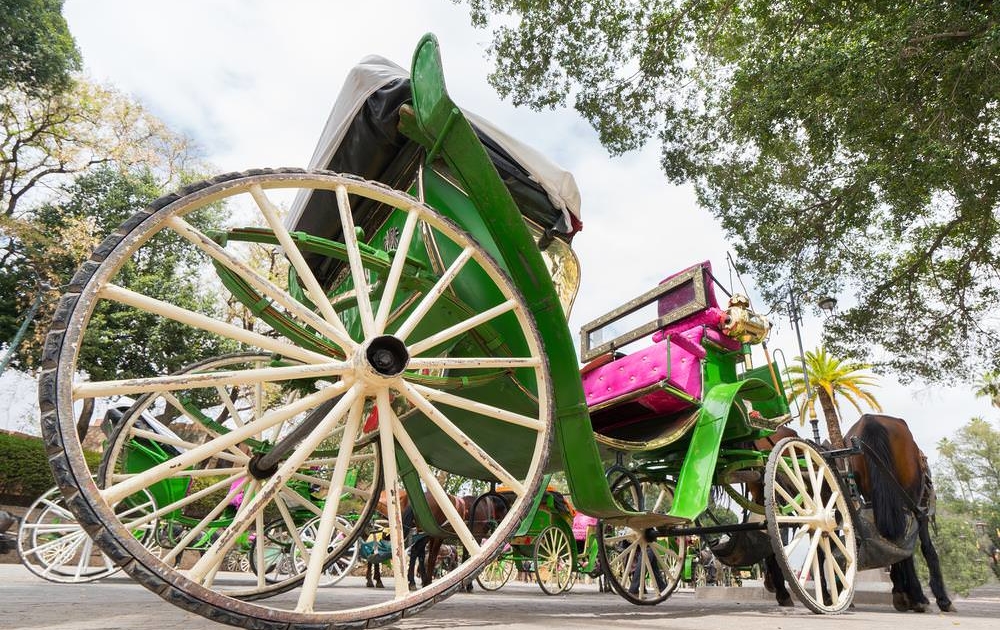 When to go to Morocco?

Morocco benefit from a Mediterranean climate where winter is generally mild and the summer hot. There are, however, some regional varieties. In winter, for example, the weather is mild in Marrakech, but in the south and the High Atlas, it can go down quickly, especially at night. The rainy season is relatively short. It starts in November and ends in January. Precipitation is more abundant in the Rif than anywhere else in the country. Spring and autumn, from April to May and September to October, are the best seasons to discover Morocco.

Average temperatures vary from 19 ° (January) to 37 ° (July). The rainiest months are: March, February and April. We recommend the months of March, April, May, June, September, October, November to visit Marrakech.

The baraka word is used daily by Moroccans as salutation, religious formulas because it contains a sense of divine grace, luck.
Walking through the souks, we often hear traders welcome the baraka. The buyer, choosing it among all other shopping and giving him a good price, lavishes the “baraka”.
This term is also often used when invited to someone to share a meal and as it should encourage to eat even more by the host, abroad, satiated, wants to stop.

The fondouks are composed of one floor buildings and a central courtyard around which are located the workshops of artisans working in the medinas and where the goods are stored.
In the Middle Ages, they are located on the caravan route which turns the Sahara Africa south of Morocco. Essential of life of the inhabitants of the medina, they welcomed in these vast houses organized around a central courtyard, bordered on the ground floor workshops, stables for camels and rooms
upstairs to accommodate the merchants and travelers.
The fondouks were gradually replaced by private houses and warehouses gradually as the traderssédentarisaient and became more prosperous.
In Marrakech, about 140 fondouks are recorded.

Meaning “God will,” Inch ‘Allah is a matching contribution phrase used in Morocco that is understood by “if our destiny permits us”. Instilled by the Muslim culture, believers consider mandatory pronounce this formula when they evoke an action to perform in the future.
The phrase is now taken up by everyone, believers or not, Muslim or not.

This term refers to the old walled town. That of Marrakech is one of the largest in Morocco with no less than 600 hectares, composed of innumerable alleys, fondouks, riads, squares, mosques, shops, workshops.
The walls stripped lanes as well conceal the modest homes that the rich remain beautifully decorated and spacious.
The Marrakech medina is also home to tanneries west of the city, including the leather used to manufacture numerous articles, such as bags and slippers.

Hammams are public baths, where since the beginning of time, people come mainly for bathing, but also to relax and chat. Present in every district of the city, they are generally close to a mosque, offering the body purification before prayer.
Steam rooms are dedicated to men and other women, but it also happens that the same place as hosts, opening hours, women and men.
And several dining rooms corresponding to different temperatures and degrees of humidity, there applies natural treatments such as soap, based on olive oil and ghassoul, made of clay.
In these hot tubs are also practiced full body scrubs to remove dead skin.

These are the traditional habitats are located in the medina, perfectly constructed to keep the cool in summer and provide warmth in the winter. The riad is organized around a central patio bathed in light, which serves as a living and relaxing. Sometimes with a fountain, orange and olive trees, it becomes shaded garden. In its strictest definition, the riad is composed of a water, surrounded by four spaces and gardens of only one floor.
In the story, the different rooms of the house are accessible by interior corridors.
The terraces are present in most riads and offer a 360 ° view over the medina.

“Gama’a” in Arabic, the word means “gathering”. Muslims then gather in these buildings, whose size and ornaments vary from the most modest to the most lavish, to share a collective prayer. There is a mosque in every neighborhood, which beat the life of its inhabitants to the sound of calls to prayer from the minaret issued by the muezzin.
These, circular in the Middle East, have the distinction of being built in a square shape in North Africa.
The most famous in Marrakech is other than that of the Koutoubia, visible 70 meter distance. In all, there are over 300 mosques in the city.
Each mosque consists of a courtyard where at its center an ablution basin.
The faithful are directed towards the quibla the prayer wall, located to the East, specifically Mecca, the holy city par excellence in Islam.
Access is forbidden to non-Muslims.

Muslim religious rite most universally observed, Ramadan is a special month of the year for more than a billion Muslims in the world. It is a time devoted to an inner reflection, devotion to God and self-control. For many devout Muslims, this period is marked by a special spiritual intensity and they spend nights praying and reciting the Quran.
Ramadan takes place during the ninth month of the Islamic lunar calendar. During this month,
Muslims have the required age must not, for key requirements, eating, drinking, smoking and
maintain sexual relations from dawn to sunset.
Three days after the month of Ramadan are days of celebration, called Eid-al-Fitr – the end of fasting feast.

Many bathrooms have plastered walls of this material, made of a mixture of lime, white cement and pigment. It has indeed such properties to be very tight and soft to the touch.
Its manufacture is complex and requires several stages of preparation of the substance to the opening, through the laying on walls and sanding.
Of tableware and bathroom accessories articles are also made of tadelakt.

The zaouïas are buildings housing the tombs of the patron saints.
In Marrakech, we are seven, each dedicated to the seven healthy revered in the city.
A zaouïa is usually topped with a pyramidal roof with green tiles and situated near a madrasa or mosque.
They are places of meditations for believers who come to pray and meditate and receive the baraka of the saint deceased.
Access is forbidden to non-Muslims.

The Zelliges means mosaics of glazed tiles and cut to form sumptuous motifs, both on floors, walls, columns of palaces and mosques as fountains and ponds.

UCLG Africa would like to thank Marrakesh Regional Tourism Council for granting us permission to use their content to describe Marrakesh including photographs.